The passion of Perpetua and Felicitas in late antiquity 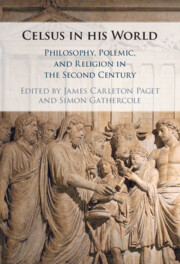 Celsus penned the earliest known detailed attack upon Christianity. While his identity is disputed and his anti-Christian treatise, entitled the True Word, has been exclusively transmitted through the hands of the great Christian scholar Origen, he remains an intriguing figure. In this interdisciplinary volume, which brings together ancient philosophers, specialists in Greek literature, and historians of early Christianity and of ancient Judaism, Celsus is situated within the cultural, philosophical, religious and political world from which he emerged. While his work is ostensibly an attack upon Christianity, it is also the defence of a world in which Celsus passionately believed. It is the unique contribution of this volume to give voice to the many dimensions of that world in a way that will engage a variety of scholars interested in late antiquity and the histories of Christianity, Judaism and Greek thought.

Permanent link to this article: http://www.postaugustum.com/en/celsus-in-his-world-philosophy-polemic-and-religion-in-the-second-century/