An Encomium for Jesus 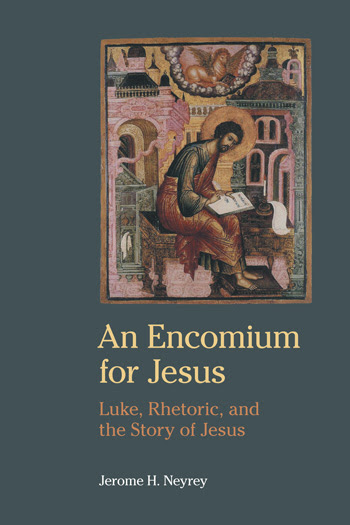 Luke’s narrative about Jesus followed the conventions for ancient biography. Trained in rhetoric, Luke employed the genre of the encomium, which regularly used to showcase biographical aspects of a person’s life worthy of honour. An Encomium for Jesus argues that Luke mastered the genre, its conventional topics, and specific instructions for composing one.
The usual topics of an encomium served as Luke’s template to organize and narrate the life of Jesus. The first topic, ‘origins’, displayed Jesus’ worth in terms of his geographical origins (Bethlehem) and generational origins (son of David, heir to his throne). His genealogy confirms a very noble ancestry. Angels and prophets speak to the importance of his birth, all conventional items.
Second, Jesus was raised as an observant Israelite: circumcised, dedicated, and an annual participant at Passover; he customarily attended synagogue. Although precocious, he lacked training in a familial virtue, which he learned subsequently by obedience to his parents.
An encomium focused on a person’s actions, generally described in terms of the canonical virtues, wisdom, courage, justice and self-control. Luke adeptly portrayed Jesus’ actions according to these virtues, correctly presuming that his audience would label this or that action as virtuous, a safe assumption. Jesus was wise in understanding people, courageous in facing death, just in his teaching, and moderate in controlling emotional reactions.
An encomium should also speak of a person’s death, a conventional feature in funeral oratory. Luke employed the tradition of the ‘noble death’ to highlight aspects of Jesus’ death, especially its voluntary and beneficial aspects. Most importantly, he narrated the many posthumous honours awarded Jesus, as cited in Acts: he did not see death; God vindicated and enthroned him; and he became the Author of salvation. Thus Luke composed a conventional Encomium for Jesus.

Permanent link to this article: http://www.postaugustum.com/en/an-encomium-for-jesus-2/