Tertullian and the Unborn Child: Christian and Pagan Attitudes in Historical Perspective 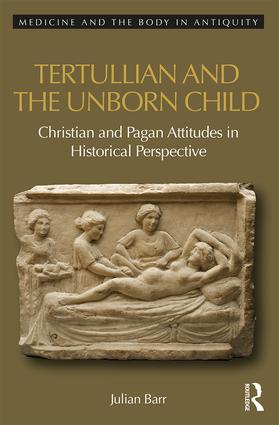 Tertullian of Carthage was the earliest Christian writer to argue against abortion at length, and the first surviving Latin author to consider the unborn child in detail. This book is the first comprehensive analysis of Tertullian’s attitude towards the foetus and embryo. Examining Tertullian’s works in light of Roman literary and social history, Julian Barr proposes that Tertullian’s comments on the unborn should be read as rhetoric ancillary to his primary arguments. Tertullian’s engagement in the art of rhetoric also explains his tendency towards self-contradiction. He argued that human existence began at conception in some treatises and not in others. Tertullian’s references to the unborn hence should not be plucked out of context, lest they be misread. Tertullian borrowed, modified, and discarded theories of ensoulment according to their usefulness for individual treatises. So long as a single work was internally consistent, Tertullian was satisfied. He elaborated upon previous Christian traditions and selectively borrowed from ancient embryological theory to prove specific theological and moral points. Tertullian was more influenced by Roman custom than he would perhaps have admitted, since the contrast between pagan and Christian attitudes on abortion was more rhetorical than real.
Read more: Routledge

Permanent link to this article: http://www.postaugustum.com/en/tertullian-and-the-unborn-child-christian-and-pagan-attitudes-in-historical-perspective-2/